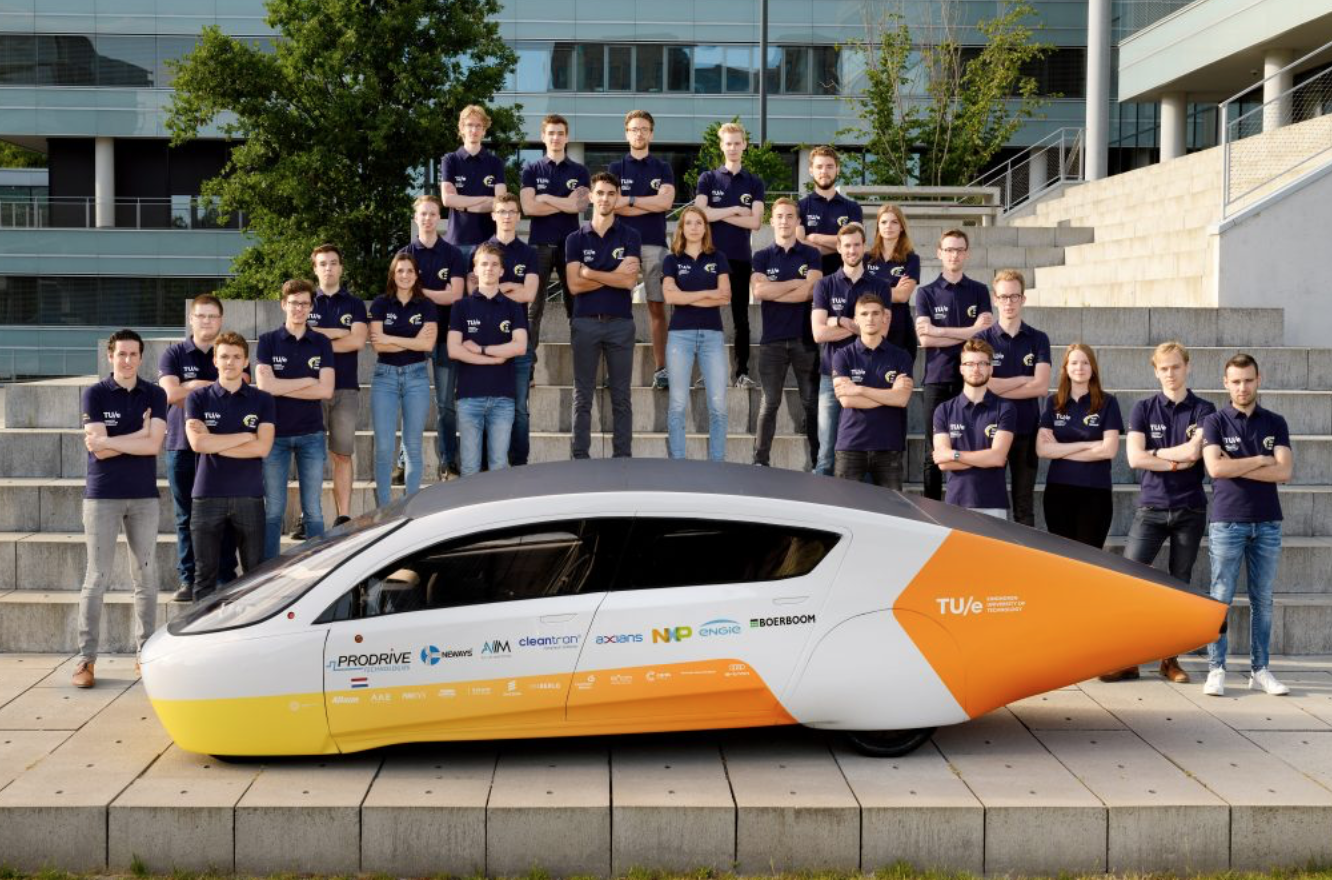 On the 4th of July, Solar Team Eindhoven presented its new solar car Stella Era. Thanks to its solar paneled roof, this car contains enough energy to theoretically cover a distance of 1800 kilometers; it can also share its abundance of solar energy with other electric vehicles directly. According to the student team at TU/e, this makes it the world’s first charging station on wheels. On top of this, the car has self-driving functions, such as the ability to autonomously search for sunny parking spaces. This is the car that the Eindhoven team will be using to defend its world title during the Bridgestone World Solar Challenge in Australia in October. And this is the car that will do

“We’re presenting not only a new solar car but a new era: an era in which cars are not energy consumers but energy sources. That’s why we call her Stella Era,” says Carijn Mulder, team manager of Solar Team Eindhoven. The team presented its fourth family car today, following in the footsteps of predecessors Stella (2013), Stella Lux (2015) and Stella Vie (2017).

“If we want to drive emission-free in 2030, as stated in the Dutch climate agreement, around 200 charging stations will have to be installed in the Netherlands every day from now on in order to provide all electric cars with energy by then,” Mulder says. “This is already unrealistic, and 85% of electricity currently comes from non-renewable sources. In short, our society is facing an enormous challenge.”

According to the students, the solution is to use cars as moving charging stations. Stella Era has a range of 1200 kilometers with four occupants, according to the standard European calculation for the range of electric cars. The distance that the students hope to travel by car during the Bridgestone World Solar Challenge will be as much as 1800 kilometers. The average distance that motorists travel each day in the Netherlands is around 50 kilometers, leaving a large part of the energy available.

In addition, the car takes the weather forecast and the kilometers still to be traveled into account, accurately determining how much energy it has left to share. The Stella App, developed by the team, allows the owner to sell valuable solar energy to other electric cars.

Another striking new feature of the car is that Stella Era uses autonomous functions to drive itself to a sunny parking space, allowing it to be recharged throughout the day. “Stella Era is a car that always gets the most out of the sun, even without a driver – a car that looks for the sunniest spot in the parking lot itself. As a result, Stella Era is not just a solar car but also an autonomous source of energy,” says Mick van der Spoel, project manager of the student team.

Is this car going to get the world title to Eindhoven for the fourth consecutive time? Photo: Bart van Overbeeke

TO SPAIN ON A SINGLE BATTERY CHARGE

The latest Stella has a much greater range than the average electric car. This is due to the fact that the energy yield of the five square meters of solar panels has been increased while the energy consumption has been reduced.

“Aerodynamics, weight and electrical efficiency are all important for low energy consumption. We’ve greatly improved the electrical efficiency this year by developing the complete powertrain ourselves. What is currently on the market just doesn’t meet the requirements for a solar car,” says Van der Spoel.

It’s for this reason that the team has designed and built the complete powertrain, from the Battery Management System to the electric motors and from A to Z in just 10 months. As a result, Stella Era can travel more than four times as far with a battery pack similar in size to that of a today’s average electric family car, even without sunshine.

In October, the Eindhoven team will defend its world title during the Bridgestone World Solar Challenge in Australia. During the world championship for solar cars, in which 50 teams from all over the world participate, the students have to cover a distance of 3022 km. Solar Team Eindhoven is the only Dutch team that is participating in the family car class.

Van der Spoel explains: “In contrast to previous years, we are only allowed to charge twice, with the largest distance between two charging points being 1200 km. And because we want to cross the finish line even in the rain and with a headwind, we built this car so that it can cover that distance on one battery charge, even when the sun isn’t shining.”