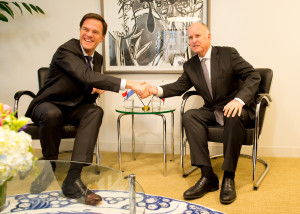 SAN FRANCISCO
Governor Edmund G. Brown Jr. last Sunday met with Prime Minister of the Netherlands Mark Rutte in San Francisco to discuss renewable energy and the international fight against climate change. “California and the Netherlands are part of a worldwide drumbeat of cities, states and countries who have seen the threat of climate change and are taking action,” said Governor Brown.
Last year, the Netherlands endorsed the Under 2 MOU climate agreement, the global pact among cities, states and countries to limit the increase in global average temperature to below 2 degrees Celsius.

A total of 127 jurisdictions representing 27 countries and six continents have now signed or endorsed the Under 2 MOU. Together, they represent more than 729 million people and $20.4 trillion in GDP, equivalent to more than a quarter of the global economy. Signatories commit to either reducing greenhouse gas emissions 80 to 95 percent below 1990 levels by 2050 or achieving a per capita annual emission target of less than 2 metric tons by 2050.

Today’s meeting also builds on a number of other bilateral and international agreements including California and the Netherlands to boost energy efficiency and fight climate change. In 2013, California signed a Letter of Intent with the Dutch Ministry of Infrastructure and the Environment to cooperate on zero-emission vehicles and climate change. The Netherlands was also the first party to join the International Zero Emission Vehicle Alliance, an international coalition created in 2015 to accelerate global zero-emission vehicle adoption. The state also signed a Letter of Intent with the Netherlands Ministry of Economic Affairs to further collaboration on sustainable agricultural technology and practices.

While California emits around 1 percent of the world’s greenhouse gases, the state is playing a leading role in broadening collaboration among subnational leaders.

The Governor last year traveled to the United Nations Climate Change Conference in Paris, the Vatican in Italy, the United Nations in New York and the Climate Summit of the Americas in Toronto, Canada to call on others leaders to join California in the fight against climate change. Governor Brown also recently joined an unprecedented alliance of heads of state, city and state leaders – convened by the World Bank Group and International Monetary Fund – to urge countries and companies around the globe to put a price on carbon.

These efforts build on a number of other international climate change agreements with leaders from Mexico, China, North America, Japan, Israel, Peru and Chile and Governor Brown’s efforts to convene hundreds of world-renowned researchers and scientists around a groundbreaking call to action – called the consensus statement – which translates key scientific climate findings from disparate fields into one unified document.

Last October, Governor Brown signed landmark legislation – SB 350 – that codified the goals he laid out in his January 2015 inaugural address to double the rate of energy efficiency savings in California buildings and generate half of the state’s electricity from renewable sources by 2030. In the same remarks, Governor Brown committed to reduce today’s petroleum use in cars and trucks by up to 50 percent within the next 15 years; make heating fuels cleaner; reduce the release of methane, black carbon and other potent pollutants across industries; and manage farm and rangelands, forests and wetlands so they can store carbon.

The impacts of climate change are already being felt in California and will disproportionately impact the state’s most vulnerable populations.